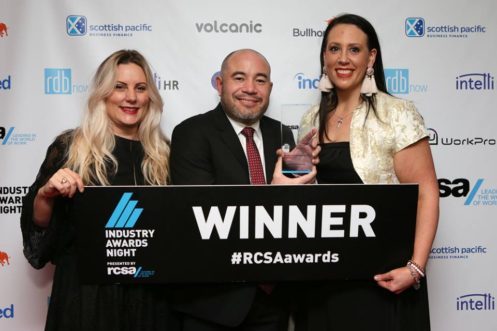 LAST night some of the brightest and most talented members of the recruitment and staffing industry were honoured at the annual Australian RCSA Industry Awards in Melbourne with a record attendance for the event.

Guests were entertained by comedian and MC Dave Hughes, while also raising much-needed funds for RCSA’s charity partner, the Fitted for Work program, which assists women experiencing disadvantage to get back into the workforce.

This year, RCSA received the highest nominations for the awards, but unfortunately the association could only place one winner in each category.

The 2018 Recruiter of the Year Award went to Jane Lowney, Head of Engineering & Infrastructure Australia at Robert Walters. The former civil and structural engineer moved into recruitment in 2010.

Judges were impressed by how she transitioned her technical qualifications to provide a strong understanding of her clients’ needs and make her one of the top billers at Robert Walters. But, more importantly, she has harnessed her expertise and influence to begin addressing the gender imbalance within engineering and infrastructure.  In 2018, as Australia embarks upon some of the biggest road, rail and development projects in its history, Jane will continue to influence the industry in her position heading up infrastructure and engineering recruitment nationally.

Apprenticeship Careers Australia won Marketing Campaign of the Year for its viral #DontWorkForJackson campaign. The campaign was designed to reach youth through a multi-media approach with the message that apprenticeships and traineeships represent a broad range of post-school career options. The video featured comedian Jackson Doherty and Australian and Cronulla Sharks football player Matt Moylan.

Kate Taylor and her team at TaylorCare Recruitment were the big winners on the night with the company awarded the Corporate Social Responsibility (CSR) Award and Kate named the Rising Star of 2018.

When founding the specialist health and social care recruitment agency in 2013, Kate made the decision to donate five per cent of annual turnover to supporting local charities.

“This year we had more nominations than ever before for the awards and the quality was among the highest we have seen,” RCSA CEO Charles Cameron said. “It was gratifying to see so many in our industry join together to celebrate and honour our peers who have contributed in an outstanding way in the past year.

“By honouring and recognising the work done by those leading by example in our sector, we continue to promote quality service from our members and industry.”